If you buy a Lenovo Yoga Tablet 8 as standard, you will get: the tablet itself and a compact box for it, a charging unit, a cable, and an instruction manual. The appearance and design of The yoga Tablet 8 is no different from its older model — Yoga Tablet 10, but the Tablet 8 is not like all the others.

If you buy a Lenovo Yoga Tablet 8 as standard, you will get: the tablet itself and a compact box for it, a charging unit, a cable, and an instruction manual.

The appearance and design of The yoga Tablet 8 is no different from its older model — Yoga Tablet 10, but the Tablet 8 is not like all the others. The point here, of course, is not in the design and author’s work, but in two features that today can not be found in any tablet: the tablet has a retractable leg for fixing and installing the device in various positions and an additional cylindrical battery, which is located at the bottom of the device. This is why Yoga Tablet 8 has an advantage over other tablets based on the Android operating system.

The tablet got its name Yoga because of its extraordinary ability – the developers gave this model a special stand, which is designed to install and fix the device in three positions: tent mode, stand mode, and hold mode. But, despite this advantage, at the presentation of the first versions of the tablet, this model did not show its best side. Presenting the first versions of the tablet, Lenovo decided to save money and present Yoga Tablet 8 with a relatively inexpensive screen, which had a lot of disadvantages.

The main ones were: a small resolution of 1280×800 pixels, a poor viewing angle and a dim image. But before the organization of the first sales, the company corrected this drawback and provided the tablet with a high-quality IPS matrix, which eventually gave the highest quality image and color reproduction, the maximum viewing angle, and a fairly large amount of brightness.

The creators of this model came with the mind to create this device and a good way picked up the materials used to create Yoga Tablet 8. The whole body of the tablet is made of plastic in silver color, the upper body decorated pleasant to the touch and smooth plastic, and the lower part of the body finished with textured rubberized plastic, the leg of the tablet is made of aluminum, the screen is protected by tempered glass. Despite the fact that the tablet has a rather unusual appearance, this did not affect its compactness and dimensions, since this device is really nice to hold in your hands, despite the fact that its total weight is 401 grams.

From a technical point of view, the Yoga Tablet 8 can not be called a tablet that is designed to use resource-intensive applications.

The Yoga Tablet 8 is based on the MT8125 platform, which includes:

If you plan to use this tablet for simple tasks, then you should not have any problems with it, since even if you run 2-3 applications at the same time, the tablet works fine. But if you like to play new games in the world and spend a lot of time on the Internet, then you may have problems, because when you open a large number of tabs in the browser or when you start serious games, when you launch several applications, the tablet starts to slow down a lot.
Despite the fact that the tablet has a relatively small weight and is compact, the developers of this model did not prevent to put in it as many as two batteries: the main and additional cylindrical. Therefore, Yoga Tablet 8 is able to continuously work offline for as long as 18 hours, the operating time should be approximately 5-6 days, it is impossible to say for sure, since the company chose not to openly distribute more detailed information about the characteristics of batteries. 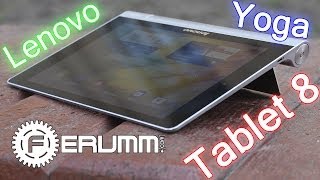 There are no reviews yet.

The online marketplace eBay is very popular among fans of online shopping. Here you can find a huge selection of products for every taste and budget. Usually their cost is several times lower compared to the prices of regular stores. But there is one caveat: to choose a really worthwhile offer, you will have to spend a lot of free time. Today, there is a great way to simplify the task. To do this, just visit the site Goods places, which contains the best offers at «delicious» prices